Jute bags (burlaps) are made of 100 % natural, vegetal and biologic material. This material is biodegradable, heat-resistant and is a thermal insulator. Jute bags, also called as hessian can be use for food packing or for industrial purpose, as a bag or a tarp.

Available in 5 oz, 7 oz et 10 oz. All sizes available on request. Custom printing on demand only.

Consult our online catalog to view the possibility of product in stock and available within a short time. Our catalog : www.packagingsolution.ca

Visit our store on St-Jacques street in Montreal

Jute is a long, soft, shiny vegetable fiber that can be spun into coarse, strong threads. It is produced primarily from plants in the genus which was once classified with the family Tiliaceae, more recently with Malvaceae, and has now been reclassified as belonging to the family Sparrmanniaceae. The primary source of the fiber is Corchorus olitorius, but it is considered inferior to Corchorus capsularis. “Jute” is the name of the plant or fiber that is used to make burlap, Hessian or gunny cloth.

The word ‘jute’ is probably coined from the word jhuta or jota, an Oriya word.

Jute is one of the most affordable natural fibers and is second only to cotton in amount produced and variety of uses of vegetable fibers. Jute fibers are composed primarily of the plant materials cellulose and lignin. It falls into the bast fiber category (fiber collected from bast, the phloem of the plant, sometimes called the “skin”) along with kenaf, industrial hemp, flax (linen), ramie, etc. The industrial term for jute fiber is raw jute. The fibers are off-white to brown, and 1–4 metres (3–13 feet) long. Jute is also called the golden fiber for its color and high cash value.

Hessian (India), Burlap in America and Canada, or Crocus in Jamaicais a woven fabric usually made from skin of the juteplant or sisal fibres, which may be combined with other vegetable fibres to make rope, nets, and similar products. Gunny cloth is similar in texture and construction.

Hessian, a dense woven fabric, has historically been produced as a coarse fabric, but more recently it is being used in a refined state known simply as jute as an eco-friendly material for bags, rugs and other products.

The word burlap is of unknown origin, though its earliest known appearance is in the late 17th century, and its etymology is speculated to derive from the Middle English borel (“coarse cloth”), the Old French burel and/or the Dutch boeren (“coarse”), in the latter case perhaps interfused with boer (“peasant”). The second element, ~lap, means “piece of cloth.The name “hessian” is attributed to the use of the fabric, initially, as part of the uniform of soldiers from the former Landgraviate of Hesse and its successors in interest (including the current German state of Hesse, whose people (and thus soldiers) were called “Hessians.” 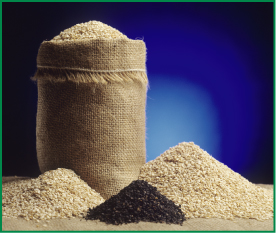 The main criteria considered in choosing your jute bag packing :

We offer the following jute products :

REQUEST A QUOTE IS EASY !

Do not hesitate to contact us for a quote prices or advice on the best product for your needs.